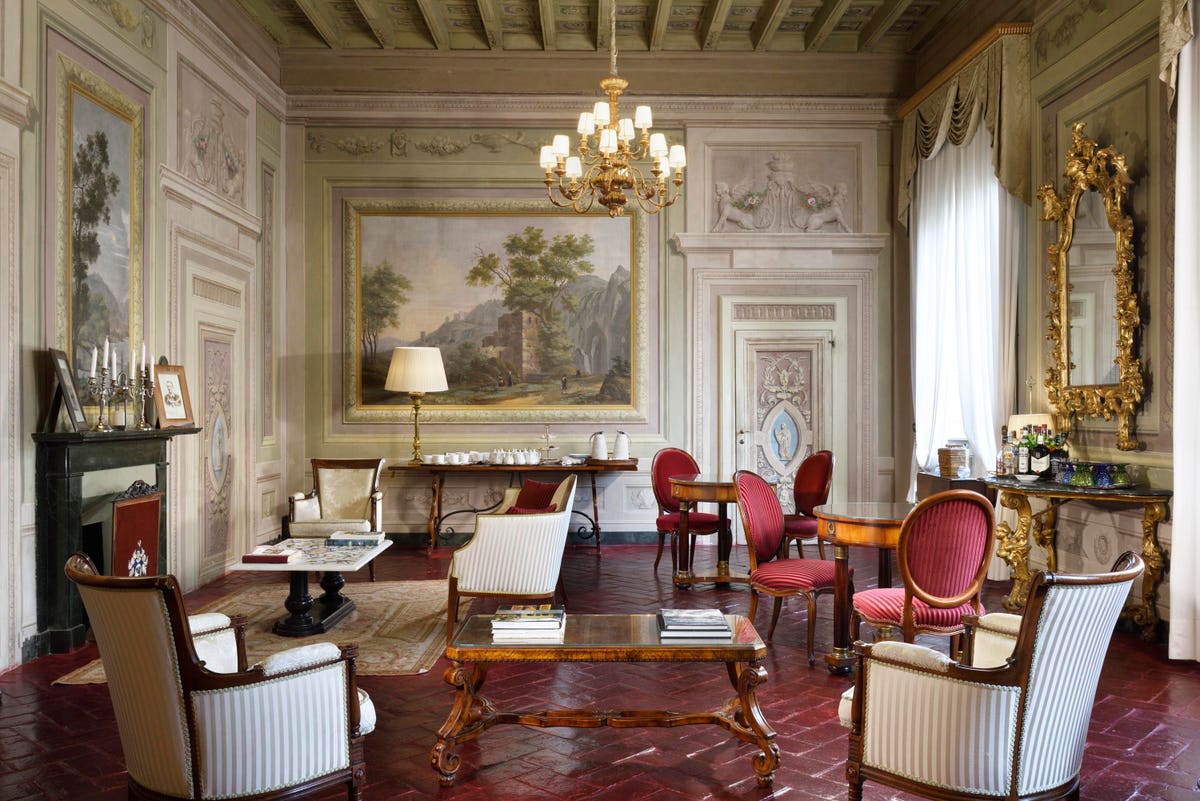 Get to know this hotel for a unique stay in Florence

(For more information on travel to Italy, visit the website of the U.S. Embassy and Consulates in Italy.)

In Florence, a city with many unique hotels, the Palazzo Niccolini al Duomo stands out.

Start with the unbeatable location, literally a pass due (two steps) from the Duomo. The views of Florence’s famous cathedral are so vivid from some suites that you would expect if you open the windows you will be able to touch the monument’s graphic marble facade. Then there’s the relaxed sense of grandeur – with just 14 rooms and three-story suites, you feel like staying in a comfortable part of an aristocratic palace, because you are.

The reception area is also unique, but not in a way you might expect. Yes, it is furnished with antiques and a large coat of arms towers over one wall, but this is not unusual in a large historic house. The reception team are welcoming and efficient, not unusual either; you count on it in a well-run hotel. What’s delightfully surprising is that most afternoons and early evenings you’ll find the woman sitting behind the desk at the front desk answering questions by phone and email, directing newcomers to their homes. rooms and responds to requests in different languages ​​for this and that, is none other than the Marquise Ginevra Niccolini, who, together with her husband, the Marquis Filippo Niccolini di Camugliano, is the owner of the palace, the latest among several generations of the family.

Ginevra Niccolini is a very modern marquise. Practical, devoted to her work and to her guests, she is dedicated to creating a contemporary and welcoming atmosphere in a very special luxury setting, which might make you think that you are staying with friends, even if friends who own luxury structures. Renaissance may be rare in many address books. “If someone says it’s like a house, that’s the best compliment I can get,” says Niccolini. “It means I did what I wanted to do.”

It’s easy to feel at home here, despite the palace’s rich history, from the moment you enter through the huge wooden doors of Via dei Servi and stroll through the small basic courtyard to reach the elevator or the staircase, as in private accommodation. Upstairs, the elegant high-ceilinged lounge with frescoed walls, antiques, classic furniture upholstered in red velvet or white brocade, and side tables topped with framed family portraits and albums in leather, is open to customers throughout the day, starting with breakfast, which includes an extensive buffet with many savory and sweet offers served until the most welcome and civil time of 11 am. You can stop by the lounge for afternoon tea and an evening drink, or sit back in a chair and catch up on reading or planning your trip whenever you want. All-day availability makes it seem like you have access to a private club in the heart of Florence, a wonderful bonus, especially if you need a respite from sightseeing or dating; the central location makes it easy to return to the palace from most parts of the city.

The palace’s history dates back several centuries, although only two families have owned it since 1532, when a Florentine banker, Giovanni Naldini, purchased buildings on Via dei Servi, where the workshop of the great sculptor of the Renaissance Donatello (a plaque on the facade commemorates this), and began to convert them. Over time the palace was altered and in the 1700s took on its present form; it was also the time when frescoes painted by the best artists of the time were added to the various rooms on the first two floors. An heiress of Naldini married the Marquis Eugenio Niccolini di Camugliano in 1879 and their descendants have owned the palace ever since. Cristina Nardini married well – the Niccolinis have been a prominent Florentine family since the 1400s, playing key roles in the city during the Medici era. All over Florence there are reminders of their history and stature, for example, a Niccolini Chapel in the Basilica of Santa Croce; a Via Giovan Battista Niccolini, named after the poet and playwright Risorgimento; and a Teatro Niccolini, the oldest theater in Florence.

In 2000, Ginevra Niccolini decided to restore parts of the property to make it suitable for guest stays, starting a three-year conversion of what was once an English school on the palace’s second floor. In 2015, further renovations were made to add two suites, bringing the total to seven, four of which contain 18th-century frescoes. A suite (Cortile) has a kitchenette and can be rented for long stays; another (Altana), contains a soothing contemporary counterpoint to all the splendor of the time: a jacuzzi.

I stayed in a double room which had a graceful Anglo-Italian style with framed prints, chintz-like fabrics, terracotta floors, and a large bathroom with marble finishes. There were also nice touches, like a library filled with titles in multiple languages, as if a caring hostess had filled her guest room with a variety of readings – Tom Clancy, Mario Vargas Llosa, Marcos Chicot, design books. and travel and the city review, Florence-for international friends who were visiting. Each evening you get a printed copy of a literary quote – something from writers like Samuel Taylor Coleridge or Emily Dickinson – to meditate with the next day’s weather forecast. There are of course a lot of modern amenities like flat screen satellite TVs, Wi-Fi, air conditioning and Nespresso machines, but in the evening I was happy to disconnect from the world and rediscover the pleasures of reading a hardcover book. delivered.

The palace can organize a variety of experiences, including visits to private palaces or the Vasari Corridor of the Uffizi Galleries; cooking class with visit to Florence’s famous food market; food and wine tours in Florence and the countryside; and private trips to nearby places like San Gimignano or Cinque Terre.