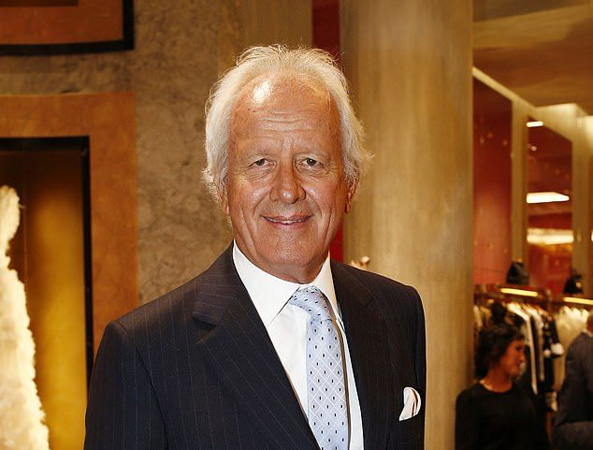 Grace Kelly also calls the hotel home. Wirth’s two children, Roberto Jr and Veruschka, said: “It is with deep sorrow and profound sadness that we have to announce the sudden passing of our father, Roberto Enrico Wirth.”

The cause of death has not been revealed.

Deaf from birth, Mr. Wirth comes from a family of Swiss hoteliers. His father, Oscar, took over the Hassler Hotel in 1921. During World War II, the hotel was requisitioned by the US Air Force for use as headquarters in Rome. The building was demolished, completely rebuilt and reopened in 1947.

When Oscar died, his wife and Wirth’s mother, Carmen, ran the hotel.

When he was younger, Wirth attended Gallaudet University, Rochester Institute of Technology, and Cornell University, where he earned a BA in Hospitality Management.

Throughout Wirth’s life, he supported the local and international deaf community in various ways by establishing funds, scholarships and serving on boards of directors.

He was the founder and president of CABSS (Centre for Deaf and Deafblind Children), a non-profit organization dedicated to supporting deaf and deafblind children and their families.

He created Il Palazzetto, a unique 16th century Roman palace located just off the Spanish Steps and a short walk from the Hassler. Il Palazzetto comprises four intimate hotel rooms and two spectacular panoramic terraces on the 4th and 5th floors as well as interior spaces on the second floor for private events.

He has received numerous personal awards such as “Independent Hotelier of the World 2005” by Hotels magazine, one of the most prestigious publications in the hospitality industry; the Rome City Hall’s economic success prize at an event chaired by the city’s mayor; and the 2006 “Marco Aurelio” tourism prize awarded by the vice-mayor of Rome, Mariapia Garavaglia. This prestigious award recognizes those who have distinguished themselves in the Roman tourism sector, highlighting the importance that tourism has for the economic and social life of the Italian capital.

In November 2014, he received the “Leading Legend Award” from The Leading Hotels of the World, for his commitment to the art of independent hospitality.

Wirth received a Bachelor of Science in the School of Hotel Administration from Cornell University as well as Honorary Doctorates of Humane Letters from Lynn University in May 2006 and Gallaudet University, Washington DC in May 2009 He is also one of eight deaf recipients of the DeafNation Inspiration Award, presented in August 2012 in Las Vegas, during the first edition of what was to become an important annual international event.

In 2016, he received an Honorary Degree in Humane Letters from the prestigious John Cabot University in Rome, Italy.

Wirth considered the Hassler his passion, his home and his family heirloom. His commitment, dedication and personal touch have allowed the hotel to achieve its position as one of the best hotels in Europe and the preferred destination for stays of the elite in Rome.

He also owned the Hotel Vannucci in Citta della Pieve, a town in Umbria.

Wirth divorced but continued to work with his ex-wife Astrid Schiller Wirth, a designer who created the stunning interiors of the Hassler Hotel.