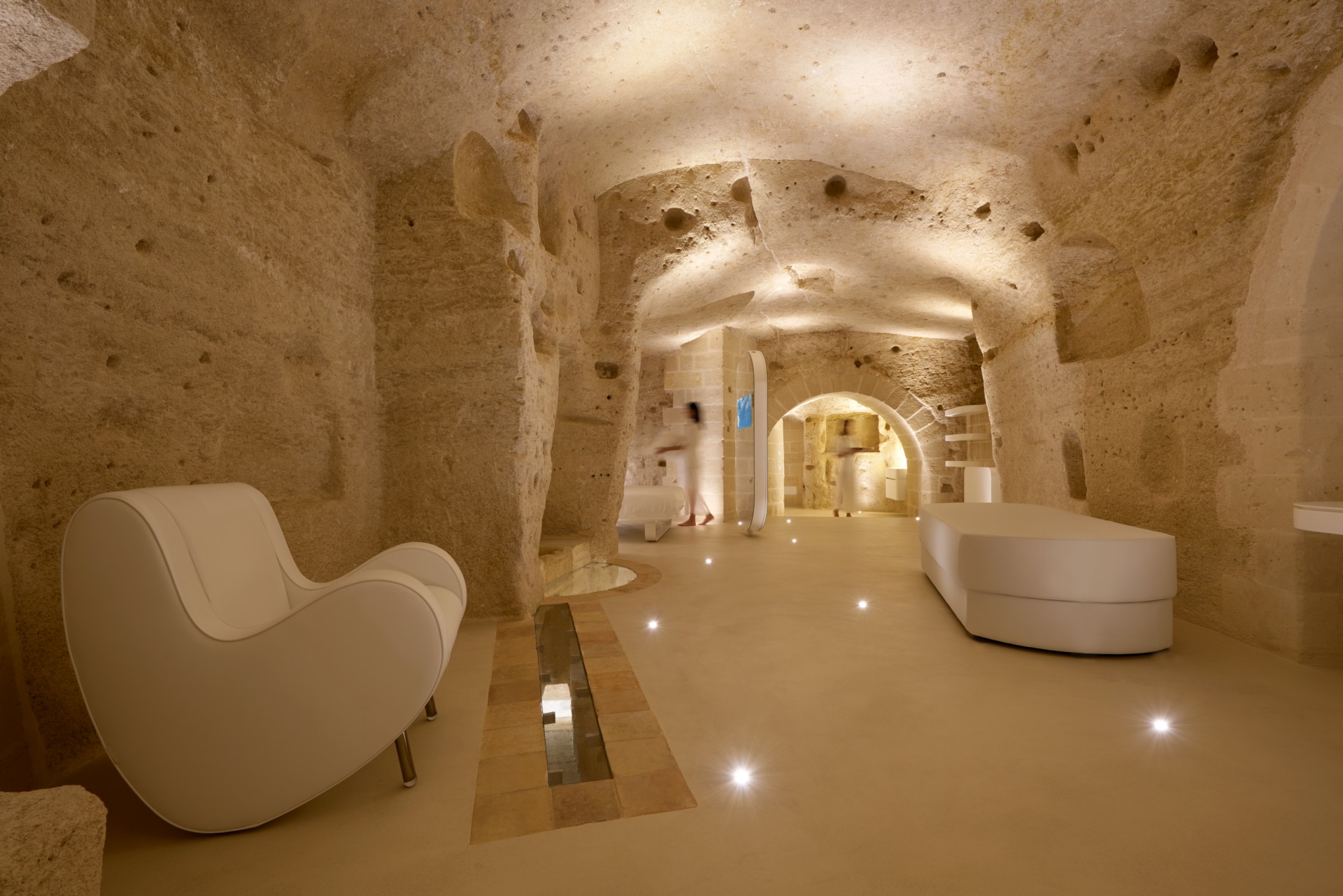 the Aquatio Cave Luxury Hotel & SPA is an exclusive accommodation facility with a Spa built in the crest of the Sasso Caveoso Matera district, in the Conche contrada dating from the thirteenth century. In addition to the management of the works, the architectural and distributive recovery project of the village, involving a complex system of buildings, roads, caves and cisterns, was carried out by the architect Cosimo dell’Acqua. Architect Simone micheli, on the other hand, created the interior and lighting design.
The architects immediately found themselves in front of a place of exceptional charm, but also in a state of significant abandonment, with many spaces filled with waste and rubble due to collapses. After having cleaned the place and carried out a meticulous survey of the spaces, it was possible to reconstruct the links between the different spaces and to trace the path of the water. The hotel was therefore conceived as an assembly of multiple structures that meander along the ridge of Sasso Caveoso, using local building systems and techniques that respect pre-existing structures. In the continuity of its old function, the conviviality of the spaces has been carefully preserved, with the relaxation area and the numerous meeting places. Starting from the bottom, with access from Via Bruno Buozzi and continuing upwards, the hotel expands over a total area of ​​approximately 5,000 square meters. The entrance opens onto two large adjacent open spaces, while in the lower part the reception, the restaurant and the breakfast room, the meeting room and the spa have been created.
The interior design and lighting project developed by the architect Simone micheli is strongly inspired by the concept of “create emotions“. The excavated surfaces and the vaults of the various spaces have been cleaned of deposits of efflorescence and brought back to their natural color, as if they had just been excavated. The scenographic lighting, with the spaces lit from below, reinforces the materiality of So, without being coated, the surfaces evoke their ancient marine origins thanks to the visible traces of fossil shells.

the spa was built at the heart of the structure, thanks to the recovery of a number of underground caves dating back to the 9th century. The larger cave houses the infinity pool, while the emotional showers have been incorporated into the ancient cisterns, with deckchairs patterned in tuff.
From the reception, guests can access the hotel rooms spread over different levels by a covered pedestrian path or by the lift carved into the rock. In the highest part of the hotel, the rooms have been “built“which offer stunning views of the Sasso Caveoso and the old part of town. Hidden inward, on the other hand, is a series of”search“rooms, suites that sink deep into the earth like the first settlements of Murgia, penetrating in some cases into the medieval foundations of the National Museum” Palazzo Lanfranchi “. In all the different environments, the furniture has was conceived as works of art, fluid elements that seem to float on the ground, free of edges and tensions. The distribution of spaces and the accommodation of the building’s equipment have been resolved through the use of white screens.
The color of the screens and the furniture is reminiscent of the whitewash used in Antiquity to sanitize stones, revealing these functional elements for what they are: new elements that come together and bend so as not to touch the walls of the building. tuff, discreetly in a context imbued with pathos and emotions.