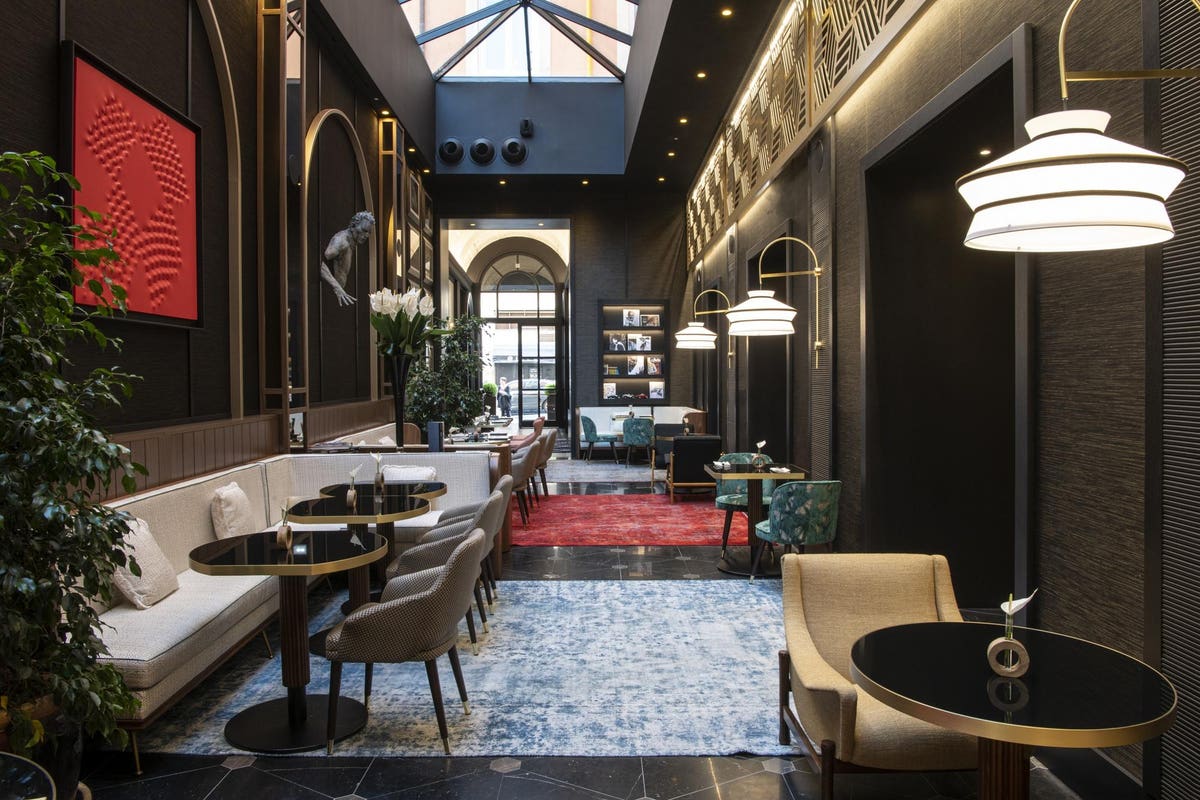 “A car can’t go there,” my bewildered taxi driver told me when I gave him the address of Umilta 36, the boutique hotel named for its location on Via Umiltà that opened in Rome in August. He assumed that anything near a major landmark like the Trevi Fountain would be blocked off. (He was wrong.) Instead, it’s tucked away on a small side street off the main Via del Corso thoroughfare. And as is the hallmark of his growing new hospitality company Shedir collectionit’s an intimate, highly designed and comfortable home, like its two other siblings in the city and the next to go live: Palazzo Roma, next spring.

There’s a wow factor as soon as you enter Umilta 36, ​​straight into the high-ceilinged Great Hall through an archway with natural light filtering in from a skylight. The lobby is a cafe/lounge/bar divided into smaller sections and flamboyantly colored: pink, gray, gold and green chairs, a red printed carpet juxtaposed with another in shades of blue, walls of paintings displaying all the spectrum, intricate golds wallpaper with green leaves. Furnishings are mid-century modern downstairs and upstairs in the 47 rooms, suites, and longer-stay apartments where wood paneling, Liberty wallpaper, and pops of color are the norm.

Currently, the Dandy Café, open all day on the ground floor, offers the food service, a mix of pasta classics, fish dishes, salads, a burger and specials of a exceptional quality for the continental breakfast. The gastronomic restaurant, the Argentinian El Porteno should open its doors in October. Terrace Flores rooftop bar/cafe is set to open next spring, offering views of the city’s popular Rome skyline. Meanwhile, on the other side of Via del Corso, the Singer Palace Hotel, the former sewing machine company headquarters in Rome converted into a sophisticated hotel in 2018, has an expansive rooftop terrace with great views, including of another hotel being developed in the vibrant hotel scene of Roma: Rome of the Six Senses.

Two blocks from Umiltà 36, another Shedir Collection hotel, Maalot Roma, also has a fiery design but skews younger, brighter colors with a placement that would have validated my taxi driver’s prediction. The Via delle Muratte which leads directly to the Trevi Fountain is a virtual sea of ​​tourists, some stopping for a burger at McDonald’s across the street, others at the outdoor tables at the Maalot Roma restaurant Don Pasquale for drinks and classic Roman dishes.

It’s a totally different scene in the band Vilon Roma near Via dei Condotti on the almost deserted Via dell’Arancio. It is quite possible to pass this 16e century house attached to the Palazzo Borghese without noticing the door or that it is the entrance to a hotel. Opened in 2018, the 18-room hotel truly feels like a private home with sharp decor and modern art. It also has the restaurant Adelaide, named after Princess Borghese, and is worth visiting even if you are staying on the other side of town. Chef Gabriele Muro from the southern island of Procida creates extremely tasty classic and modern dishes both Roman and southern that are in fact works of art in visual composition. (Two recent examples: the special gnocchi with pumpkin, porcini mushrooms and red prawn carpaccio.) Weather permitting, the restaurant also has a small, quiet, leafy patio behind the hotel, perfect for a break from the crowds. now that tourism is back. still in Rome.

Rosewood will open a hotel in Milan in 2025

‘Can we share a hotel room in Egypt if we are not married?’ | Travel